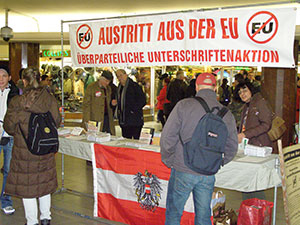 261,159 Signatures for Referendum on Austria’s EU-membership

If 100.000 persons In Austria sign a petition over the course of one week they are entitled to have this petition, a so-called Volksbegehren taken up in parliament. In the week from June 24 to July 1 a petition, "Volksbegehren für den Austritt Österreichs aus der Europäischen Union" (Petition for Austria’a exit from the EU) gathered no less than 261,159 signatures, the second highest ever result for a Volksbegehren. This result is the much more remarkable as the initiative was not taken by parties or other power centres and did not get any assistance from the media. According to Inge Rauscher who took the initiative this petition has brought the issue of a binding referendum on Austria’s EU membership nearer. Click here to read more...

Austria, officially the Republic of Austria , has been a member of the United Nations since 1955, joined the European Union in 1995, and is a founder of the OECD Austria also signed the Schengen Agreement in 1995, adopted the European currency, the Euro, in 1999 and part of the Eurozone. The Declaration of Neutrality was a declaration by the Austrian Parliament declaring the country permanently neutral. It was enacted on 26 October 1955 as a constitutional act of parliament. Currency: Euro Population: 8.4 Million