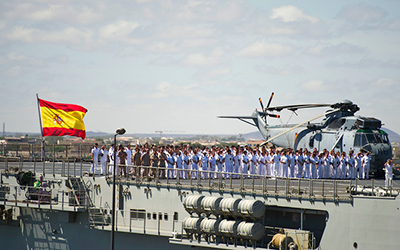 The EU's image is not very important!

What is important is to find an international way to prevent and solve conflicts, so that humans dont have to become refugees and to help refugees to survive and get protection. Click here to read more...

Officially the Kingdom of Spain joined the EU on 1 January 1986, joined the single currency on 1 January 1999 and ratified the Lisbon Treaty on 26 June 2008 which came into force in 2009. Spain is a member of the United Nations (UN), the European Union (EU), Eurozone, the Council of Europe (CoE), the Organization of Ibero-American States (OEI), the North Atlantic Treaty Organization (NATO), the Organisation for Economic Co-operation and Development (OECD), the World Trade Organization (WTO) and is a member of the Schengen Area. Spain, is made up of 17 Autonomous communities and 2 autonomous cities. Created in accordance with the Spanish constitution of 1978, with the aim of guaranteeing the autonomy of the nationalities and regions that comprise the Spanish nation. 2 of these communities; Catalonia and The Basque Country have both proposed Referendums for independence but have so far been refused. EU Commissioner Joaquin Almunia confirmed in 2013 that Catalonia would have to apply for EU membership in the event of secession from Spain. In November 2013, the Spanish Prime Minister, Mariano Rajoy, stated that an independent Scotland's entry to the EU would require the consent of all the existing members and that an independent Scotland or other regions gaining independence, taken as a reference to Catalonia, would end up outside of the EU. Currency: Euro since 1 January 1999 (formerly Spanish peseta, ESP) Population: 46.5Million